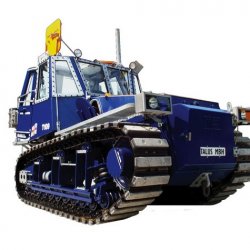 The Talus MB-H was specifically designed for the RNLI, to launch and recover lifeboats from beaches.

The Talus MB-H launches and recovers lifeboats, up to 15 tonnes in weight, from beaches, in a safer and faster manner than previously available. It is capable of towing such lifeboats, on specially designed carriages, at speeds of up to 12.0 kph over varying beach conditions. It has the ability to work at full power in up to 2.44m of calm water, and can drive and winch simultaneously in order to recover the lifeboat. The driver has a waterproof, protective cockpit, and duplicated controls, to allow operation of the vehicle whilst facing in either direction.

The hydraulic control and drive system utilises a single 'joystick' controller for all transmission functions; this is protected by a 'dead man' pedal. The engine is a Caterpillar 3208 V8 diesel, a feature this machine has in common with some lifeboats. It has, in the event of mechanical failure, the ability to be 'battened down' and abandoned on the sea bed in up to 9.0m of water, without the ingress of sea water. Extensive corrosion protection is employed, to reduce maintenance whilst continuously working in the very hostile environment of sea water and beach conditions.

30 Talus MB-H machines are currently in service with the RNLI at locations around the coastline of the British Isle and Eire.

The Talus MB-H can perform a range of Hauling, Winching and Heavy Recovery operations either on Dry Land or in Flooded Areas in addition to its original Lifeboat/Beach applications.

Essentially, the Talus MB-H is a water-tight hull on tracks, with all the machinery and equipment fitted inside, protected from the harsh environment. The machine can tow the lifeboat and carriage across the beach and launch in sufficient depth of water to ensure a safe launching. Recovery takes place in shallow water, with the boat being winched back on to the carriage and returned across the beach to the boathouse. 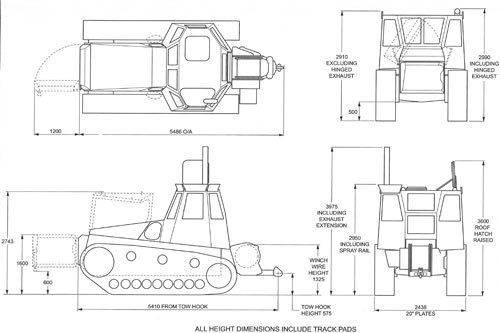